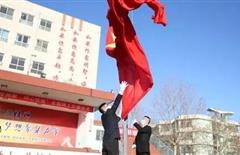 A. Did you watch B. Have you watched

What you when she came in

—When did the earthquake in Lushan happen

They are talking about something the telephone.

We were very that Jim didn’t pass the exam.

beautiful park the Summer Palace is!

Eddie was sleeping _______ Millie was reading a magazine.

Every time I heard the other students talking and laughing. I ______ my heart break. I couldn’t talk to anyone about my problem, and I didn’t want my parents to ____me. Then one day, my classmates talked happily with their friends, but I sat my desk ______as usual. At that moment, a boy entered the classroom. I didn’t know who he was. He passed me and then turned back. He___me and without a word, smiled.

Suddenly I felt the touch of something bright and friendly. It _____ me feel happy, lively and warm. That smile changed my life. I started to talk with the other students and made friends. Day by day, I became closer to everyone in my class. The boy with the lucky smile ____my best friend now.

I believe that the world is what you think it is. If you think you are lonely, you might always be alone. So smile at the world and it will ___.

3.A. someone B. everyone C. anyone D. nobody

5.A. hear about B. talk about C. care forD. worry about

9.A. has become B. became C. become D. is becoming

Last Friday a storm swept through two villages in the New Territories, destroying (摧毁) fourteen homes. Seven others were so badly damaged (破坏) that their owners had to leave them, and fifteen others had broken windows or broken roofs. One person was killed, several were badly hurt and taken to hospital, and a number of other people received smaller hurt. Altogether over two hundred people were homeless after the storm.

A farmer, Mr. Tan, said that the storm began early in the morning and lasted for over an hour.

“I was eating with my wife and children,” he said, “When we heard a loud noise. A few minutes later our house fell down on top of us. We tried our best to climb out but then I saw that one of my children was missing. I went back inside and found him, safe but very frightened.”

Mrs. Woo Mei Fong said that her husband had just left for work when she felt that her house was moving. She ran outside at once with her children.

“There was no time to take anything,” she said, “A few minutes later, the roof came down.”

Soldiers helped to take people out of the flooded (水淹的) area and the welfare department (福利机构) brought them food, clothes and____

1.How many homes altogether (总共) were damaged in the storm

A. Fourteen B. Twenty-one

2.Where was Mr. Tan when the storm first began

C. He was outside the house. D. He was on the roof.

A. her husband knew there would be a storm

B. they were all inside the house when the storm became worse

C. she felt the house was moving

D. the welfare department helped her

5.Which of he following may be the best title for this passage

A. A Terrible Storm B. A Lucky Woman

On November 18th, 1908, three men went up in a balloon. They started early in London. The headman was Auguste Gaudron, and the other two men were Tannar and Maitland. They had a big balloon, and they were ready for a long way.

Soon they heard the sea below them. They were carrying the usual rope, and it was hanging down from the basket of the balloon. At the end of the rope they had tied a metal box. This could hold water, or it could be empty. So they were able to change its weight. They were also carrying some bags of sand.

After the sun rose, the balloon went higher. It went up to 3,000 meters, and the air was very cold. The water in the balloon became ice. Snow fell past the men’s basket, and they could see more snow on the ground. There was also some snow on the balloon, and that made it very heavy. It began to go down towards the ground. The men tried to throw out some more sand, but it was hard. They tried to break the icy sand with their knives, but it was not easy. The work was slow and they were still falling, so they had to drop some whole bags of sand. One of them fell on an icy lake below and made a black hole in the ice.

At last they pulled the box into the basket. It was still snowing, so they climbed to get away from the snow. They rose to 5,100 meters! Everything became icy. They were so cold that they decided to land. They came down in Poland heavily but safely. They had traveled 1,797 kilometers from London!

1.Three men flew in a balloon .

A. more than two centuries ago

B. to visit Poland

D. to another city

2.The metal box was used for .

B. carrying ropes of the basket

D. carrying the bags of sand

3.When the balloon went up higher, .

A. they saw the sun go down

B. the temperature of the balloon began to fall

C. they could see a black hole on the ground

D. they made a hole in the basket with

A. in a foreign country

5.The three men had to land because .

A. they were very hungry

B. they had not enough sand

C. they pulled the box into the basket

D. they felt too cold

A little boy invited his mother to the first parent meeting of his primary school. To his surprise, she said she would go. This would be the first time that his classmates and teachers met his mother. She was not a beautiful woman ① her scar (伤疤). His mother told him there was the scar when she was born.

At the meeting, other people were impressed by the kindness and natural looks of his mother, but the little boy felt embarrassed for his mom’s looks, and hid himself behind others. Just at that time, he heard the conversation between his mother and his teacher.

“How did you get the scar on your face ” the teacher asked.

The mother replied, “When my son was a baby, his room caught fire one day. ② Everyone was too afraid to get into the room. I rushed into it in a minute. While I was running towards his bed, a beam (横梁) fell down and I placed myself over him to protect him. I was knocked and I knew nothing. ③幸运的是,有人救了我们。” She touched the burned side of her face. “But I have never regretted (后悔) doing what I did.” She added.

Having heard that, the little boy was so moved that he hugged his mother with tears in his eyes. He held mother’s right hand tightly for the rest of the day.

5.What did the little boy do for the rest of the day

B: By the river. A lot of children were flying kites there.

B: Yes, but the wind wasn’t strong. It was good weather for flying a kite.

B: Zhang Lei and Liu Hua. They bought two new kites and got there earlier than I did.

B: Yes. We played there for about three hours.

A. Who helped you to mend the kite

B. What were you doing yesterday afternoon

C. Who did you fly kites with

D. It blew yesterday, didn’t it

E. Were you busy yesterday

F. Where did you fly the kite

G. Did you enjoy yourselves yesterday

A. Who helped you to mend the kite

B. What were you doing yesterday afternoon

C. Who did you fly kites with

D. It blew yesterday, didn’t it

E. Were you busy yesterday

F. Where did you fly the kite

G. Did you enjoy yourselves yesterday